Graduate school is a major life decision.  There is potential for great gain and also financial loss.  As you weigh your choices or prepare for the choice already made, check out this resource: Grad Guide.  You will find answers to the most common questions you may have, answered honestly and clearly.

I wish you success!

Posted by KSchimmel at 4:17 PM No comments:

A Perspective on Online MBA Study

I wanted to share this helpful article from an Australian perspective. I'm sure there are applications to American business as well:

Andrew has also written a helpful piece on the Top 10 Business Uses of Microsoft Excel.

Posted by KSchimmel at 9:52 PM No comments:

Moving Beyond Anxiety: A Book Review 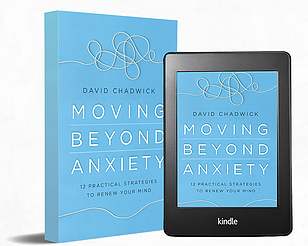 In my lifetime I have moved from believing mental illness was just a spiritual deficiency to knowing firsthand it is a palpable physical reality to understanding it is as complex as the human being experiencing it.  I approach books on the topic of mental health with skepticism, watching for those who discount the spiritual aspect as well as those who ignore the physical and mental struggle.

That said, I will recommend this book for the person with "normal" anxiety or the person going through a struggle born of some mild to moderate life change.  I would also recommend it as a supplement for someone getting professional counseling, in order to be sure the spiritual aspect of anxiety is addressed sufficiently.  It is not a substitute for professional help for some people who suffer from severe, debilitating anxiety.

Now for the good part: the emphasis on right thinking! When God says the truth will make us free, that is, of course, true.  This book is a guide to focusing on the truth about God and His relationship with us.  Anxiety is based on lies we tell ourselves, while Scripture is the path back to truth. David Chadwick covers 12 practical strategies to renew your mind--to stop the lies your mind may be telling you.

For more information on this book, check out the website.

I received a free copy of this book for my honest review.


Posted by KSchimmel at 3:39 PM No comments:

Subversive Living: Freedom-Loving People: YOU are Not Alone.

Subversive Living: Freedom-Loving People: YOU are Not Alone.: While streaming a movie, I found myself gagging at a public service ad done by TV celebrities touting the virtues of the Soviet lockdown and...
Posted by KSchimmel at 2:50 PM No comments:

I have read some wonderful books this year on one of my favorite subjects: mathematics.  Now, stay with me!  Math can be an engaging and even entertaining topic. 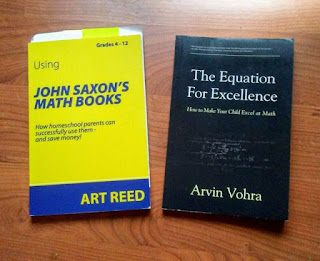 Here are the two most helpful books on math teaching I have read this academic year.  Using John Saxon's Math Books - Grades 4 - 12

by Art Reed explains in detail how to use Saxon math successfully with any student from upper elementary grades through calculus.  He leads you through the incremental approach, explains proper grade level placement, and discusses the importance of homework.  The Equation for Excellence : How to Make your Child Excel at Math

by Arvin Vohra is a short and sweet guide to the disciplined teaching and tutoring of math from arithmetic through high school, using the "Asian method" to produce highly competent scholars. Parents can read these books--no need for a math degree. 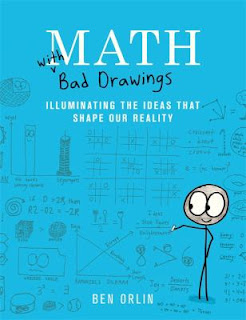 Finally, just for fun, read Ben Orlin's Math with Bad Drawings for a heaping helping of geek humor.  As is always the case with good comedy, there is plenty of truth mixed in.  Expect some laughs, some new insights, and plenty of bad drawings to delight and illuminate.
Strengthen your resolve to give your students/offspring the best possible foundation in mathematics.  These books are all encouraging and informative, written in a conversational style--like getting advice from a good friend.

Posted by KSchimmel at 5:58 PM No comments:

Use as Directed: Saxon Math 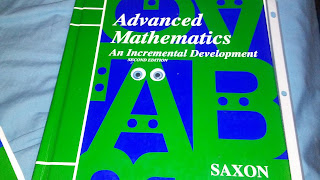 The homeschool community is not of one opinion regarding Saxon Math (or much of anything, now that the movement has grown so large and diverse.) Some insist it is not rigorous enough, others insist it is boring, or too hard, or the Holy Grail of mathematics textbooks.  While I don't believe any curriculum is ideal for every child at every grade level, I would like to make the case for Saxon Math.  I have found it to be effective when used as directed.

First, why do people not succeed using Saxon Math?  Well, Saxon is different from most other curriculum choices.  Teaching Saxon requires a paradigm shift if you have taught using other books.  Saxon lessons are incremental and cumulative, while most math books are organized topically.  Topical organization is convenient administratively, but it enables students to forget Chapter 3 topics after the test on Chapter 3, when they move on to another topic in Chapter 4.  Later, these gaps from forgetting come back to bite them, as math is the most cumulative of subjects.  Saxon, on the other hand, has many short lessons which introduce new topics piece by piece.  The problems at the end of each lesson include a couple of problems from the new material, while the rest are review from any earlier lesson.  A student cannot just be glad Chapter 3 is over and breathe easy until his gap in knowledge rears its ugly head later in the semester.  The Saxon student must confront every previous topic regularly on her daily problem sets, so she decides to deal with it instead of ignoring it.

Did I say "daily problem sets" just now? Indeed!  Here is where the "use as directed" part comes in.  Saxon expects students to do a lesson every school day, working all problems.  Did I say "all" just now? Yes.  Sure, the problems tend to be in pairs by topic, but each problem tests a different aspect of the lessons.  Would you take only half your prescribed medication and expect the same results as if you took as directed? Of course not!  Now, of course, many of you will object that this takes too long.  If your child is spending hours on a single problem set every day, you have to find out whether:

Placement is a topic for another day, but it is better to move back a grade level and have the child work problem sets that take no more than an hour in lower grades and possibly 90 minutes to 2 hours per day in Algebra 2 and above.

I was not a big believer in Saxon until I was asked to teach it at a homeschool coop.  I have taught Advanced Math and Calculus, mostly to students who had also done Saxon for Algebra 2.  The students who work the problem sets all week and ask questions about those problems at our semi-weekly meetings learn a lot of math.  It was much harder to teach a traditional curriculum at a weekly coop, as traditional books present material in huge topical chunks--perhaps better if you have daily access to a teacher, but often overwhelming to the student doing the bulk of their work alone.  I have to say that, although I was not inclined toward liking Saxon, I now have "comparison taught" and am a big fan of the Saxon homeschool texts.*

*  Saxon is no longer owned by the late John Saxon's family.  The publisher's newest version for public schools has removed the integrated geometry into a separate textbook and aligned everything with Common Core.  I emphatically DO NOT recommend this version.  The homeschool version is still available as well, so be sure to get this version.
Posted by KSchimmel at 7:57 AM No comments:

Other Bodies: A YA Novel that Affirms the Right to Life 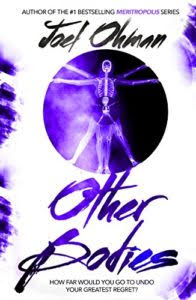 How wonderful to have something pro-life for the youth market!  Dystopian novels are popular among youth, and this one has a message they are not getting in most places they frequent.

While I found the writing a bit wordy and overdone in spots, I think it will appeal to teen readers.  Hopefully it will get them thinking, talking, and asking important questions about current events and about how they live their own lives.

Get this book for the young readers in your family or church today.

How do you change someone's mind about abortion?

Note: I received a free review copy of the novel for my honest review.

Posted by KSchimmel at 11:09 AM No comments: